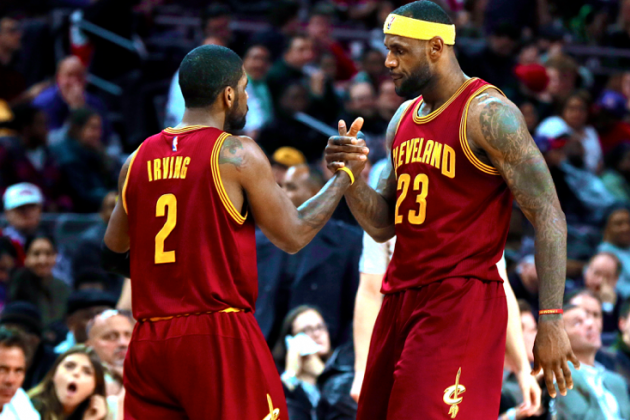 Recent sports headlines have all read something along the lines of, “Irving requests trade to find a bigger role.” This offseason has been arguably the most action packed in NBA history with new storylines coming every other day. As a fan of the game, this could not be a more exciting time but in terms of the Kyrie Irving move, it is just another example of how the NBA has taken a turn for the worse.

Since LeBron James returned to the Cavaliers in 2014, the Cavs have been to three straight NBA finals with a decent record of 1-2. Before James, the Cavs were a middle tier team struggling to make the playoffs with Kyrie struggling to find support on the offensive side of the ball. Needless to say, LeBron turns any team into a championship contender but joining Kyrie in Cleveland immediately put them back on the map. This then begs the question, “why would Kyrie want to leave if they have been to three straight NBA finals?” There is only one reason that makes sense, LeBron hasn’t said anything about his future with the Cavaliers and Irving is afraid he will be stuck in a post James era in Cleveland, again struggling to make the playoffs every year despite a stronger supporting cast with Kevin Love and Tristan Thompson. This move is selfish and openly disrespectful to the man who brought your team into the spotlight, LeBron James. If you ask me, Kyrie should shut his mouth and play ball, the Warriors are the team to beat, it’s an uphill battle but it can be done. Don’t worry about playing for another team when you just got embarrassed by a juggernaut of a team in the NBA finals, get angry and get redemption.

All fans in the NBA were rattled when the Kyrie news surfaced but everyone is overlooking the prima donna attitudes possessed by players like Gordon Hayward, Paul George, and Chris Paul. I understand Hayward’s reasoning to leave a decent Jazz team but back in the Jordan era, players would stay and fight with their teams. Take the old Jazz team for example, Karl Malone and John Stockton were constantly being stopped in the finals but they stayed and continued to battle rather than looking to re-sign with an already successful team like Hayward did with the previous #1 seed in the East, Boston Celtics. Chris Paul used to be one of my favorite players in the league but now he’s nearly as big of a snake as Kevin Durant. Your team has Blake Griffin and DeAndre Jordan, two solid big man, and you can’t get out of the first round of the playoffs. Instead of fighting with the same team until you get past this barrier you join the runner-up of the 2017 MVP Award, James Harden in Houston. This is a pathetic move and frankly a betrayal to the Los Angeles Clippers.

Arguably, LeBron James started this trend of super teams back when he made his decision to join the Miami Heat and Dwayne Wade along with Chris Bosh. I despised that move when it happened and I can’t help but get frustrated when all the talent is sucked out of the East and now there are at least 4 “super teams” in the West. It makes for interesting basketball and an increase in the ratings but this is not the way the game is supposed to be played.