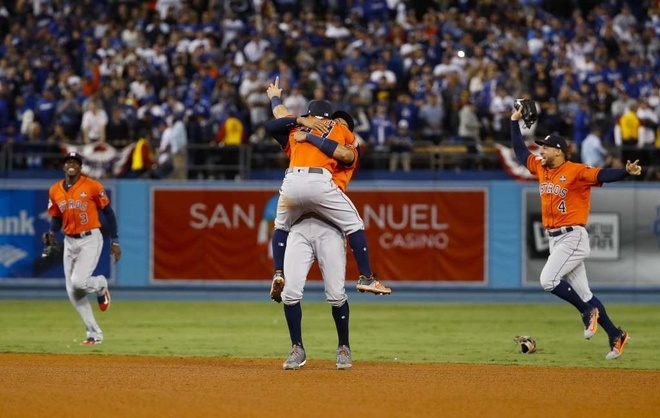 Last night the Houston Astros made franchise history, winning their first World Series in team history. After a thrilling seven game series between the Los Angeles Dodgers, the Astros emerged as world champions. Led by a bottom-less bag of bullpen pitchers, unparalleled batting, and ace pitching, the Astros seemed to have it all. The Stros are without question the best team in baseball and will be for at least three more years to come. The explosive offense of second basemen Jose Altuve, shortstop Carlos Correa, third basemen Alex Bregman, and centerfielder George Springer will continue wrecking havoc on opposing teams just as they did this series.

The Houston Astros are the champions of baseball, get used to seeing the Commissioner’s Trophy in Houston for the next few years.

Without question, it was consistent play at bat that won the Astros this series but it’s important to recognize their two aces of Dallas Keuchel and Justin Verlander. The two were almost untouchable throughout the series and single handedly won the Astros games throughout their playoff run and in the world series. Moving forward Houston will be looking to grab a lights out reliever to enter the conversation of one of the best baseball teams ever assembled. Considering how young their core four of talent is, it’s clear that sky’s the limit for the Houston Astros.

As seen in this past series, the Astros have the weapons to be successful for at least the next three years. Although the American league will continue getting stronger with the Indians primed for a series push, and the always dangerous Yankees and Red Sox.