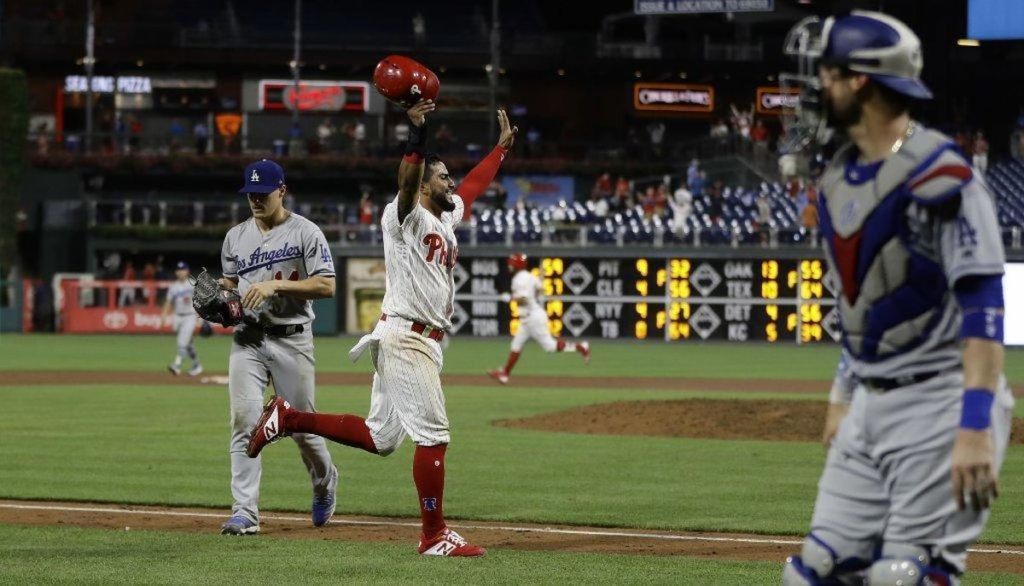 Certainly the most emotional series of the season for the Philadelphia Phillies ended very strong as they would go on to win last night 7-4 in the bottom of the 16th and also win this afternoon, 7-3. With the wins, the Phillies are sole leaders of the NL East by 1.5 games over the Braves and 7.5 games up on the Nationals. Many storylines surrounded the series as it was Chase Utley’s last regular season series in Citizens Bank Park and Manny Machado’s first as a Dodger. The Phillies were able to put all distractions aside and made a few mistakes throughout the couple of games but ultimately come out on top with wins in the final two games. We’ll take you through the final two contests between the Phils and Dodgers, highlight who played well, and look ahead for the Phillies’ road trip.

Last night’s ball game certainly turned into more than just a game as just under 6 total hours of baseball was played. Nola pitched 5 innings, striking out 5 but also giving up 3 runs on 5 hits. All and all not a great performance for the lone Phillie all star. What saved the Phillies in this game was the collective performance for the bullpen. There were a total of 9 pitchers in the game and 7 of them were able to come in and pitch a scoreless inning or 2. The bottom of the 7th was the most notable in terms of offense headline by a 2 run home run by catcher Jorge Alfaro to tie up the game. Eight more innings of scoreless baseball followed before Phillie newcomer Trevor Plouffe sent a shot to deep right center field against position player Kike Hernandez, ending the game in walk off fashion in the bottom of the 16th.

As for today’s game, the win marked the 34th home victory for the Phillies, tied for the most in all of Major League Baseball. Notable performances came from Carlos Santana who was 2-3 with a triple and three RBIs, Rhys Hoskins who was able to connect on another long ball early on, his 18th of the season, and shortstop Scott Kingery who has been an offensive liability as of late but got the pitch he was looking for and drove it to deep right field for his 5th home run of the season. Another significant performance came from veteran pitcher Jake Arrieta who went 6 innings for the Phils giving up just 2 earned runs on 5 hits and striking out 6 as well. Phillies’ right fielder Nick Williams was able to tack on a bit more insurance in the bottom of the 8th with a little floater in to no mans land between 3rd base and left field bringing in Carlos Santana to score, tallying the game’s final run, 7-3 Phillies.

Looking ahead, the Phillies will start a four game series against the Cincinnati Reds with Ranger Saurez on the mound, at 22 years of age, he’ll make his major league debut. In order for the Phillies to retain their first place position, they’ll need more production from some of their weaker batters. Players other than Rhys, Odubel, Carlos, and Maikel need to continue to step up as we saw strong performances from unsung players like Scott Kingery and Nick Williams throughout this series vs. the Dodgers.