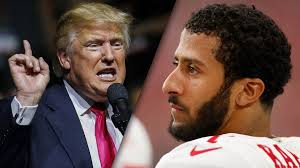 In a social media driven age, there is a clear emphasis, sometimes overemphasis, on the story rather than analysis of the sport itself. With that in mind, JTP has decided to break down recent sports stories/events that would perfectly translate to TV entertainment.

There is an interesting dichotomy between how phenomenal 2016 was in terms of sports in contrast to outside of the sports world. The year started out with Peyton Manning going out on top as a Superbowl champion, finally tying his lousy brother Eli in rings. But on the other hand we also lost iconic American figures like Muhammad Ali, Arnold Palmer, David Bowie, Prince. Yes, there was Villanova’s amazing last minute buzzer beater, but there was also a spike in terror attacks. But what about the Cavs’ and the Cubs’ improbable championships after both being down 3-1? Yeah that’s great but there was also the most politically divided election in American history. In addition, 2016 was the start of the Kaepernick kneeling protest which thrusted politics into the sports world. If done well, this 30 for 30 would be extremely interesting.

I don’t want to be a homer but the story of Sam Hinkie and the Sixers is so perfect for 30 for 30 directors especially if the Sixers end up winning a championship with this core. From the timeline from Hinkie’s hiring to the Colangelo burner account is honestly pure gold. Pair that with interviews with otherwise irrelevant “victims of the process”? You’ve got yourself a home run documentary.

After recently reading an article describing the upbringing of Aaron Hernandez, his story needs to be put on screen. His morbid childhood filled with molestation, domestic abuse, and a fluid sexual orientation gives a chilling dateline-esque type story that could provide insight into why Hernandez committed murder. Furthermore, his chaotic relationship with such a buttoned up organization like the Patriots would draw lots of eyeballs.

The sheer amount of media attention around LeBron’s decision to leave Cleveland warrants a documentary. Not only LeBron but KD and just the overall rapid development of the idea of a NBA superteam has created a divide in the sport which would be something very interesting to analyze.