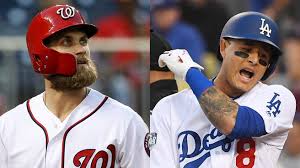 Free agency excitement leading to free agency woes seems to be a common theme in Philadelphia over the past year. However, according to Vegas and multiple sources, THIS upcoming free agency period for the Phillies should be fruitful. According to Vegas, Phillies not only have the highest odds of landing Bryce Harper(+100), arguably the best player in baseball, but also have the highest chances of snagging Manny Machado(+150), arguably the best shortstop in baseball. But, that’s not all. The Phillies are in the running to sign Josh Donaldson, Dallas Keuchel, Craig Kimbrel, and A.J. Pollock, all big name free agents that can undoubtedly improve the current roster.

Phillies GM Matt Klentak says that the organization intentionally designed for this influx of cash to occur during this free agency season. The Philadelphia Inquirer talked with Klentak at the annual GM meetings: “One of the things about going through the rebuild is that we were very careful with our out-year commitments…When we were going through lean years, we didn’t sign any players to multiyear contracts. I think that’s always going to be something that’s on our mind, maintaining payroll flexibility.”

The Phillies’ financial flexibility will pay off this offseason as they look to add talent to a roster that is relatively inexperienced, but fraught with potential. Imagine a lineup with Rhys Hoskins, Bryce Harper, Machado, Nola, Arrieta, Santana, and Wilson Ramos? I’m quaking in my seat from pure excitement. Nevertheless, hopefully the Phillies can dispel the free agency blunders recently and bring the squad back to ’08 form.