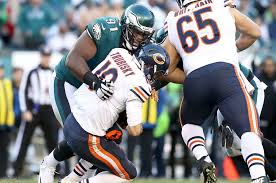 The Eagles enter their wildcard matchup in Soldier Field as the underdogs… again. Specifically, Vegas are giving the Eagles 6.5 points and they believe the total over/under is 41.5. This writer understands Vegas’s convictions as the Bears cemented the third seed and have probably the best defense in the NFL in addition to Solider Field being one of the toughest places to play in the league. But, the Eagles will be up for the challenge as Nick Foles looks to stir up some playoff magic once again.

The Bears have one of the strongest front sevens in the NFL putting a lot of pressure on the Eagles O-Line to create adequate protection for Nick Foles. In addition, new head coach Matt Nagy is known for implementing unique and tricky schemes that could throw an inexperienced Eagles’ secondary for a loop. However, the Eagles deep playoff experience paired with their aggressive pass rush featuring Michael Bennett, Fletcher Cox, Brandon Graham among others should scare the Bears.

The biggest factor towards an Eagles victory will be getting to a young QB in Mitchell Trubisky and forcing crucial turnovers that will lead to points offensively. I have complete faith in Nick Foles and I believe the Eagles will win this game in a higher scoring game than people may expect. I’m going to take the over and the Eagles to win outright. Prediction– Eagles 28-21