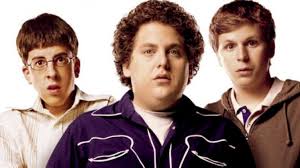 As a kid born in the late 90’s–early 2000’s, Superbad was your insight into raunchy, adult comedy. It was played at countless sleepovers with the volume turned down so Jonah Hill’s excessive swearing didn’t wake your parents up. It is a staple of the 2000’s comedy movie scene and is still being watched over and over to this day.

One of the key components that made this movie so iconic was the on screen chemistry between Seth and Evan (Jonah Hill and Michael Cera, respectively) The brash, hallow arrogance of Seth and the more reserved, sensitive Evan makes the audience laugh hysterically but also feel empathy towards these two socially struggling characters. The underlying tension between Seth and Evan regarding their separation in college is covered by the comically fake “tough guy” personas put on by both of them throughout the film. However this masculine cover up is finally broken during one of the movie’s final scenes when they drunkenly return to Evan’s house where they express their love and admiration towards one and other, adding to the wholesomeness of the movie(something that current comedy movies seem to lack).

Supporting characters like Officer Michaels, Officer Slater, Jules, and of course Fogell AKA McLovin really complement the two main characters extremely well. Specifically, the use of Fogell by director Greg Motolla as a punching bag for Seth and Evan, two characters who are pretty low on the social totem pole themselves, gives the audience hilarious interactions esepcially the McLovin fake ID scene.

Another key aspect of this movie was how simple yet intricate every scene was. Every interaction was meaningful and had subtle funny moments that kept the audience entertained the entire time. From the penis drawing scene to Evan’s performance to the drug abusers, every scene is perfectly interwoven and genuinely, wholeheartedly funny.

This movie is an exquisite interpretation of comedy that will be relevant for years and years to come.