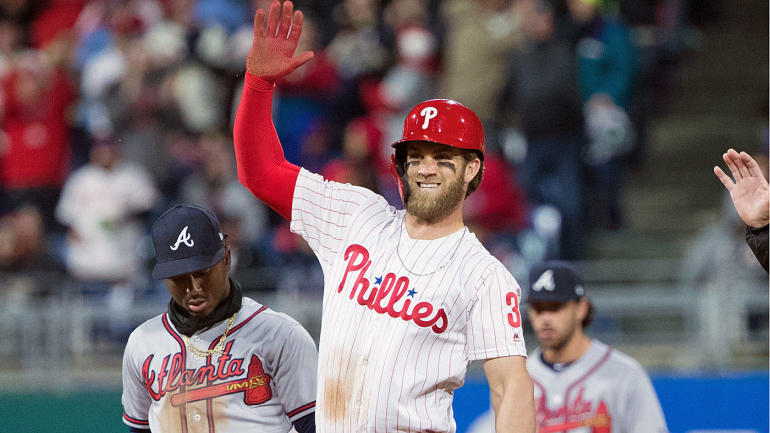 After beating the Atlanta Braves once again Sunday Night 5-1, the Phillies are looking like one of the more promising teams in baseball.

The Phillies concluded their series against the Braves with a rocky start as the Braves scored a stolen home base run after sloppy defense in the first couple innings. Braves pitcher Kyle Wright started the first two innings strong as well, but finished his 4.1 IP tenure allowing two hits, three earned runs, and five walks, spurring a Phillies scoring run that they would maintain the entire game.

After McCutchen’s second homer of the season got things started for the Phils in the third inning, Bryce Harper doubled to swing the momentum in their direction. The injury-plagued Braves’ bullpen struggled with getting the ball in the strike zone for the middle part of the game, allowing four more walks including a walk-in run on bases loaded. After Realmuto drived in a sac fly RBI, the Phils took a 3-1 lead in the bottom of the fifth.

That score was maintained until the Bryce Bomber came alive again and jacked his second homer of the season in the bottom of the seventh.

The improved defense of the Phillies came to play as well as Arrieta, who struggled last season in terms of ERA, only allowed one earned run and struck out a respectable six batters in six innings. What really stuck out however was how big of an impact Realmuto has on the defensive side of the ball. His playmaking abilities and quick release speed caught two Braves stealing and prevented multiple players from getting into scoring position.

I know it’s extremely early, but the Phillies’ free agent acquisitions along with better managing from Gabe Kapler seemed to have lead to three important things that will help should the Phillies be playing October baseball. First, having Hernandez, Herrera, and Franco as your bottom three batters is a scary sight to any opposing bullpen. Second, the acquisition of JT Realmuto as a defensive anchor will help limit runners in scoring position which should compensate for the sometimes shaky bullpen. Third smarter base-running from seasoned speedsters like Jean Segura should afford the Phils valuable runs late in games that they wouldn’t have gotten last year.

Overall, Philadelphia should be very excited for what’s to come this season and let’s hope they continue this quality of play as Bryce Harper makes his return to Washington D.C. at 7:05 PM today.