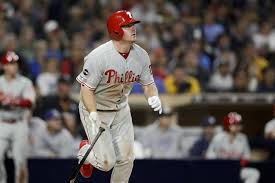 After a five game losing streak, the Phillies made a resurgence last night to rout the San Diego Padres 9-6. After hearing the somber news that after an MRI Phillies centerfielder Andrew McCutchen had torn his ACL, the players seemed determined to avenge their fallen teammate.

Jered Eickhoff, who has been a very shaky pitcher for the Phils as of late, probably felt extreme relief from the batting lineup’s potent offense considering he pitched six innings, allowed three runs and four hits while striking out five. Although some of his pitches in his arsenal have developed, he still has a ways to go to become one of the elite pitchers in the bullpen. Hector Neris cleaned up for his 11th save of the season.

The MVP of the game, however, was newly acquired outfielder from the Seattle Mariners, Jay Bruce. Bruce absolutely dominated the game hitting a grand slam and a two run homer, tying a career high with six RBI’s for the game.

The lead driven by Jay Bruce was cut to three runs in the 8th on a homer by Franmil Reyes, his second home run of the game, and a two run blast by Eric Hosmer. Again, it was too little too late as Hector Neris showed himself to be one of the Phillies’ few consistencies in the bullpen, clinching the 9-6 win, the Phils’ 34th on the year.

The Phillies will look to take the three game series with the Padres at 3:40 this afternoon as Jake Arrieta will face Padres’ Cal Quantrill to see if Jake the Snake can earn his sixth win of the season.

Prayers to Andrew McCutchen, a player widely regarded around the league as a well-respected teammate and person.