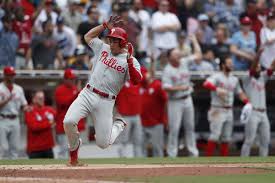 Yesterday afternoon the Phillies won what manager Gabe Kapler calls”one of the most important wins of the year” against the San Diego Padres 7-5.

After incurring a three run deficit early in the game, the Phillies desperately needed some offensive firepower to put themselves back into the game, but little could predict where it would come from.

The Phillies were down 5-2 in the seventh inning when Trey Wingeter threw a ineffective slider giving Cesar Hernandez the perfect opportunity to knock a RBI scoring triple to cut the lead to two. Then, “$330 million dollar man” Bryce Harper hit an RBI double and then was driven in by a Jean Segura single to tie the game at 5 heading into the 8th inning.

In the light of recent negative situations regarding Phillies outfielders(Domestic abuse case against Odubel Herrera and ACL injury to Andrew McCutchen), Phillies recent call up from Lehigh Valley, Adam Haseley, was forced into action in a crucial half inning and performed. Haseley doubled in the top of the 8th to drive in the go ahead run and then was knocked in by backup catcher Andrew Knapp’s single to left center.

However the Phillies immediately dug themselves into a hole as closer Hector Neris faced bases loaded with only one out. Luckily, he was able to battle and strike out pinch hitter Ian Kinsler and force an infield fly to Padres star, Manny Machado. The Phillies were able to hold on to a 7-5 win in one of the most stressful wins of the seasons.

The Phils travel to Cincinnati to play the Reds at 7:00 PM on Saturday as Pat Eflin will face 24 year old Cincinnati starter Tyler Mahle.