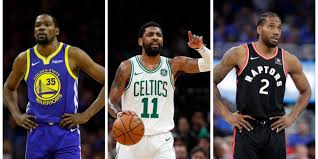 As the NBA Finals are coming to a conclusion with the Raptors looking to close out the series tonight in Toronto leading three games to one, the NBA’s offseason(really a sports season on its own) inches closer and closer. So we here at JTP will predict where the NBA’s biggest free agent superstars will be calling home for at least the next season.

Kevin Durant is a game time decision for tonight’s game but it would be naive for us to not think he’s looking forward to this summer. Although he is in a championship culture in Golden State, we believe after all the backlash for going to the Warriors and joining a 73-9 team, Durant wants to take his talents somewhere where he will be more appreciated and just more valuable to a franchise. Pending if someone else(possibly Kyrie Irving or Anthony Davis) joins him we believe KD will be heading to NYC to join the Knicks who are looking for their first title since 1973.

The silent killer, Kawhi Leonard, has not even given any kind of clue of where he intends to be next season. It is particularly tricky considering his success he’s having with the Raptors right now especially if they close out the series and bring a championship to Toronto. Although there’s been reports he has bought property in Toronto which Kawhi himself has denied. At the end of the day the guy was vocal about wanting to go home to LA and since he seems like a simple, family oriented guy, he will go to LA next year but not the Lakers, but the less featured Clippers.

Kyrie, in addition to Kevin Durant, is looking to leave organizational stability and good coaching for another squad. Recent reports have speculated that he wants to return to either one of his two “hometown teams” or possibly rejoin LeBron in LA with the Lakers. The Knicks who have enough cap space to sign both Irving and Durant will do just that and Kyrie will head to NYC.

Klay has been an integral part of the Splash Bros and Warriors dynasty since its inception. Earlier this season, I would’ve said he wants out to shine on his own with a different franchise, but listening to recent reports and the way he’s seemed to bond with Steph and the Warriors organization in addition to the fact that the Warriors are capable of giving a max contract to him makes me thing differently. He stays in Golden State for the 2019-2020 season.

Last but not least Jimmy G. Buckets, an playoff bucket getter for the Sixers, enters the stacked 2019 free agency pool. He currently has a $19.8 million dollar player option offered by the Sixers and if he declines that he can get resigned for a five year max contract which is something not many other teams can offer. My gut is telling me he stays with the Sixers so they can truly “run it back” for next season.