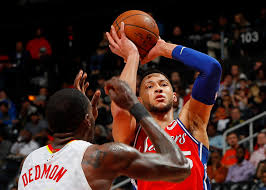 After a chaotic free agency period for the NBA and more specifically for the Sixers, we’ve reached a somewhat quiet point in the summer but…….who else saw the video of Ben Simmons knocking down jumpers like it was nothing? LIKE WHAT???? Might as well put his name on the MVP trophy next season and LeBron should hand over the mantel of best player in the world…

Sorry I overreacted. But, with pieces of video like that one can only hope that the Sixers are able to “run it back”. With that in mind, let’s look into the crystal ball to see the best and worst case scenarios for the Sixers for the 2019-2020 NBA season.

Imagine this…The Farg is erupting. It’s Game Seven of the 2019 NBA Finals. All of Philadelphia is up on their feet as the Sixers are barely clinging to a two point lead with eight minutes left in the fourth quarter. Ben Simmons, who was an all star this year and has seen his midrange jumper become lethal, slowly dribbles up the court. NBA MVP Joel Embiid calls for the ball in the post as he bodies a smaller, yet formidable Montrezl Harrell.

Josh Richardson, who has filled the hole left by Robert Covington but done it five times better, waits on the perimeter with his hands on his knees. Tobias Harris, who’s returned to his Clippers level of play has shown he was worth the max contract and has been a 20 PPG scorer, comes off a ball screen set by integral veteran addition, Al Horford, ready to receive the ball.

Although there were some minor chemistry bumps early in the regular season, the Sixers come out the gate hot and took advantage of a relatively weaker eastern conference. They have three All-Stars in Ben Simmons, Tobias Harris, and Joel Embiid who each have blossomed into elite NBA players.

They finish the regular season with the overall number one seed and tear through the early stages of the playoffs– beating Jimmy Butler and the Heat along with the Indiana Pacers in the first and second rounds. After defeating the Milwaukee Bucks in six games the Sixers will play the high-powered LA Clippers and eventually lose in 7 games but have a great season nevertheless.

Imagine this…. Ben Simmons never develops a consistent jumper, Joel Embiid has nagging injuries and doesn’t reach his MVP potential, Tobias’s contract looks like a wash, and the bench is simply unproductive. The Sixers earn the four seed in the East and lose once again in the second round to the Indiana Pacers as TJ McConnell celebrates beating his former team. Elton’s lack of draft depth and “hit or miss” free agent signings don’t pay off and the Sixers complete another confusing season. Trust the Process?