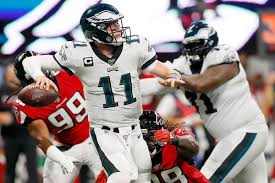 Does Nelson Agholor have to go back to “catching therapy”? Probably not but nonetheless, Eagles fans can’t help but feel frustrated after Sunday night’s game in Atlanta. While the Falcons seem to be treating the victory like they just won the Superbowl, the Eagles are content in defeat knowing they have won the more meaningful games against Atlanta.

Here are the Biggest Takeaways:

Carson(if he stays healthy) can bring us another Lombardi

I know a lot of negative Eagles fans(which is basically all of them) will say “WHAT? he was 6 of 16 in the first half for 47 yards and two picks!” I know. Slow down. Wentz’s resilience in the second half and ability to make plays, to me, counteracts his subpar play in the first half. He makes the type of plays that win championships and if Agholor has caught that ball, the public perception on Wentz’s performance would be completely different. I mean the man literally threw a laser off of his knees. He’s incredible.

This team could possibly be infected by the injury bug

Although there is no doubt this roster is one of the most talented and championship-ready rosters in the NFL, the birds may be injury plagued come December. In only the second game, the Eagles lost DeSean Jackson for multiple weeks, Alshon Jeffery was out, Carson was hurt for a couple of drives. They essentially looked like the 2018 roster, riddled with injuries. Hopefully, this is not a consistent trend throughout the season.

However, he did blitz on a fourth and three that allowed Julio to break free for a game-sealing 54 yard touchdown, so we’ll see how Schwartz adjusts this week against the Lions.

Again, if Agholor caught that ball, we would be telling a completely different story. However since we are not New Orleans Saints fans, we’ll accept defeat and move on to our next opponent, Detroit.

I really like this team. Carson, barring injuries, I truly think can have an MVP-caliber year and I think the defense is elite. The main foreseeable problem is injuries, which is obviously uncontrollable but I hope it doesn’t happen considering how special this team could be.

If you’re a Philly sports fan, sports fan in general, or just enjoy hearing differing opinions on a wide variety of topics from music to pop culture, please check out our blog/podcast on our website.