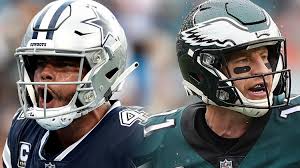 After two narrow victories over two universally considered “bad” NFL teams, the Eagles don’t really jump off the page as we head into the final weeks of the NFL season. The entire receiving core is in shambles. Lane is hurt. The secondary can’t cover anyone above the talent level of Steven Sims. The D-line looks tired. Dougie P looks a little over his head.

Yet, we are still avidly cheering for our birds because somehow the NFC East, undoubtedly the worst division in the NFL, comes down to the game this Sunday against the (evil) Dallas Cowboys. Both teams being 7-7 and both somewhat underwhelming their respective fan bases this season should make for an interesting matchup.

However, after a blowout win over a playoff contender in the LA Rams this past Sunday, the Cowboys look poised to do some damage in the Linc this coming Sunday. How worried should the birds be?

Here are some keys that I feel are important for the birds to celebrate their NFC East title on victory Monday.

The number one priority the Eagles need to have in order to win this game is to defend the run. That’s easy to say but though to back up considering Cowboys running back, Ezekiel Elliott has averaged 114.8 rushing yards per game against the birds defense, the most by any player against the Eagles in the Super Bowl era. Fletcher Cox needs to awaken from his depleted past couple of games if the Eagles want to see a shot at victory.

The Eagles offense currently has 23 turnovers(tied for 9th in the NFL). Those need to stop to keep Dak and the Cowboys offense off the field. The way the Eagles dominated in 2017 and how most of league’s teams dominate today is by winning the time of possession battle. Listen, the Eagles offense and just overall talent is nowhere near as good as the Cowboys, but by playing smart and playing conservative football, the birds legitimately can win this game.

Although the first time Wentz faced the Cowboys, his performance was subpar(16/26 191 yds 1 TD 1 INT with an 80.8 QBR) the past two weeks of this season have shown he is able to carry a wide receiver group led by, yes, Greg Ward Jr. Against the Giants, Wentz threw up a whopping 50 times for 325 passing yards and two passing touchdowns. The next week he topped that with an RTG of 109.3 and another clutch late game-winning drive.

To be frank, the Eagles are bad. But they’re our kinda bad. I know Saint Nick left last year but if this team can muster up any more Philly magic to help propel them to the playoffs, then I for one would consider this a successful season considering the injuries we’ve sustained.

Are you a fan of Philadelphia sports, sports in general, or just enjoy hearing differing opinions on a wide variety of topics from music to pop culture to your new favorite show? Check out our blog/podcast on our website.

Thank you and enjoy!