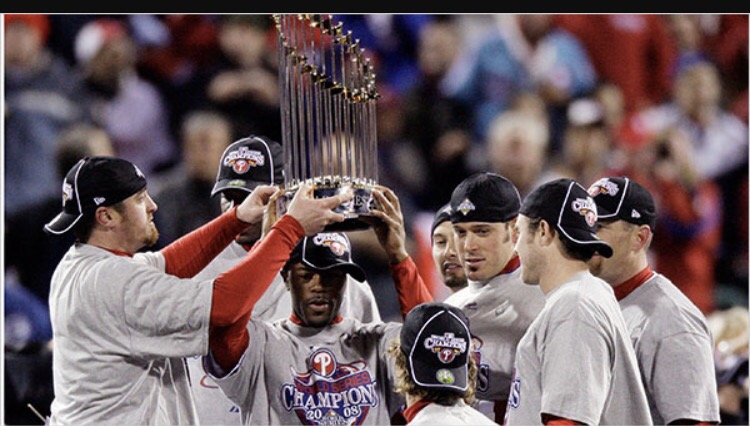 “Swing and miss…. STRUCK HIM OUT! The Philadelphia Phillies are the 2008 World Champions of baseball!”

The iconic call made by the late, great Harry Kalas perfectly depicts the overwhelming excitement felt by Philadelphia during a cold October night in 2008. Philadelphia had been experiencing a sports drought, not having won a title since 1983. Also considering the difficult economic period the country was enduring, the Phillies’ title served as a bright star in a dark time. As a nine year old, the World Series win kindled my intense love for baseball and cemented the Phillies players as some of my all time role models . The talent on this team was unmatched— from the clean swing of Chase Utley to the calculated pitching of Cole Hamels, the Phillies’ World Series win was a huge aspect of my childhood and the undoubtable number one Philadelphia sports moment in this century.

2.) Miracle at the Meadowlands 2

The Eagles improbable 31-10 fourth quarter comeback versus the rival Giants in week 15 is one of the defining comebacks in sports history. With a wild card spot in ten balance, the eagles were able to defy the odds and beat the Giants on a last second punt return by Desean Jackson. I feel like this moment really resonated with the city because the Eagles’ “come from behind” attitude and spirit really reflects the values Philadelphians pride themselves on.

In the 2001 NBA Finals, the noteworthy tandem of Kobe Bryant and Shaquille O’Neal led the Lakers to not only the NBA Finals, but also an undefeated playoff record. The 76ers, led by Allen Iverson, were heavily overmatched and were supposed to get swept. However, many people looked over the relentless competitive nature. The Sixers, and more specifically Allen Iverson, came out of the gate hot, but the Lakers fought back to send the game into overtime. With around a minute left and the sixers leading by two, Iverson performed a devastatingly quick step back move causing his defender, Tyron Lue, to collapse on the floor. Without any hesitation, Iverson stepped over a fallen Tyron Lue and nonchalantly jogged down the court– forever cementing himself as a Sixers legend.

The Philadelphia Flyers, an 8 seed headed into the NHL playoffs with many expecting them to be bounced in the first round, and even after miraculously making it to the Eastern Conference Semi-Finals, hockey die-hards gave the Flyers no chance against the Boston Bruins. After going down 3-0 in the series, Flyers fans came to the inevitable conclusion that the Bruins would win. But, they were sorely mistaken, the Flyers came back from a 3-0 deficit to force a game seven at TD Garden. Early in the first period Flyers goalie Michale Leighton let up three goals to a high potent Bruins offense. Once the game seemed out of reach, the Flyers scored once in the final minutes of the first period, twice in the second period, and a crucial score by Simone Ganye game the Flyers an unbelievable win
5.) “Gives it to Jenkins…. for the championship….. YES!!!”

Personally, I think this is the greatest clutch shot in college basketball history, but since Villanova is not readily associated with the Philadelphia sports scene, it’s downgraded slightly. Arciadacono’s shovel pass to Kris Jenkins’s three pointer was absolutely unfathomable. Villanova had been known to choke early in the tournament, but their fantastic win against a college basketball blue blood in North Carolina diminished that reputation. Villanova’s amazing championship is one to definitely tell the grandchildren.