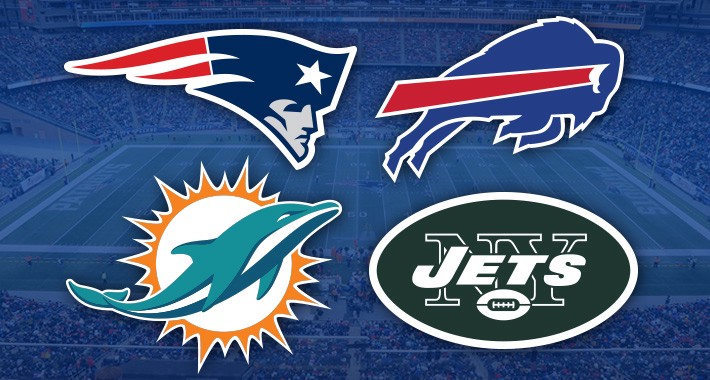 Over the next couple of weeks, JTP will be taking you through each of the NFL’s division and give you who we think will come out on top. With the season right around the corner, there is still time to put in a bet for the division winners.

New England Patriots: I can’t remember the last time any of the three other teams in the division ever gave the Pats any kind of competition. This year will follow suit and the Patriots should cruise to another division title. Watch for Chris Hogan and rookie Sony Micheal to have strong years and defensively, their secondary is getting older and a lot of questions loom after former defensive coordinator Matt Patricia has left the team for the head coaching job in Detroit.

Miami Dolphins: While the Dolphins will see the return of their “franchise quarterback” for the upcoming season, I ultimately see a little to no improvement for a below average team. Defensively, they brought in veteran lineman Robert Quinn who should take some of the pressure away from Cameron Wake. Their secondary is very weak and will definitely struggle against any team with a C+ or better QB.

Buffalo Bills: The Bills are another team that has lot that remains to be seen. For starters, the most important position in football is currently in doubt, who will be the starter, a rookie, a bust, or Nathan Peterman? Lesean Mccoy had an eventful offseason which may have an impact on his season but if he can block it all out, he’s still one of the most talented downhill runners in the national football league.

New York Jets: As soon as the Jets decide to fully commit to their new drafted QB Sam Darnold, the sooner they’ll start winning. Their defense has a lot of potential with a very good safety in Jamal Adams and a talented pass rusher in Leonard Williams. The biggest red flag for this team is their offense, there isn’t a position that gives you confidence.