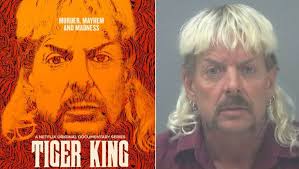 It would be naive of me to think that most of America at this point hasn’t already binged half of Netflix. If you’re one of the sorry souls that’s taken on the brave challenge of putting on your favorite PJ’s, grabbing a pint of Ben and Jerry’s Ice Cream, and snuggling up in your basement, the hit docu-series, Tiger King, has defintely been a part of your content consumption sometime over the past however 27 weeks( or at least that’s what it’s felt like).

Both misunderstood. Both men that had a great vision but accomplished it an unorthodox way. Both taken down by authoritative figures that tried to stand in their way.

Sure, Sam Hinkie isn’t now in prison and didn’t kill innocent animals, but ,hey, he tanked for draft picks, an inconceivable offense in the eyes of the NBA.

Both extremely loyal to Joe Exotic/Sam Hinkie and continue to to fight for each one of their respective legacies even to the point where they’ve adopted their name into the identity in some way.

Both Joel and John must learn to excel in their respective professions without their mentors to help guide them.

Carson Wentz, a talented and competent quarterback with a history of injury issues, has been the bedrock for the Philadelphia Eagles franchise over the past couple years. Yet, in the Eagles’ Superbowl year, Nick Foles seemed to get all the praise despite Wentz leading the MVP conversation and the birds to an 11-2 record before his injury.

Similarly, John Reinke was an integral part of the Greater Wynewood Zoo. He never started trouble and just came in and did his job well every single day. Yet when the time came for Joe Exotic’s trial, he was not even asked to testify, showing how under appreciated he really is.

Similar to Joel, Ben has a lot of thanks to give to Sam Hinkie considering he was the one who put the Sixers in the position to draft Ben with the number one overall pick back in 2016. Ben is also a renowned lady killer as he’s been with seen with many celebrities over his short NBA career leading some people to question his overall commitment to basketball as some aspects of his game have not developed at the rate Philadelphians were expecting.

Also, “Raise the Cat”. I mean c’mon it works perfectly.

Similarly, Doc Antle has a good relationship with Joe Exotic as they understand how they’ve been able to benefit one another’s zoos. Additionally, Antle is in polygamous relationships with multiple women that work at his sanctuary for almost no money. Sure, “lady killer” and “sex slave keeper” have two very different connotations, but you get the idea.

Jeff Lowe is a man of many broken promises. He said he would run the zoo with Joe Exotic but instead remolded it into his vision, leaving Joe in the dust. Jeff was supposed to be the wise, rich leader that would save G.W. Zoo, in reality, he was a fraud that put the zoo in jeopardy.

Similarly, Chip Kelly was the innovator, the man that was supposed to be head and shoulders above every NFL coach on how to properly run an efficient offense. He essentially acted as GM and brought the pieces he wanted into the building with no opinions from upper management. Let’s just say Chip Kelly is like Jeff Lowe in the sense that their perception doesn’t match their reality.

Thank you for reading! If you’re a Philly sports fan, sports fan in general, or just enjoy hearing differing opinions on a wide variety of topics, check out our blog. Also please follow us on Twitter and like us on Facebook! TTP